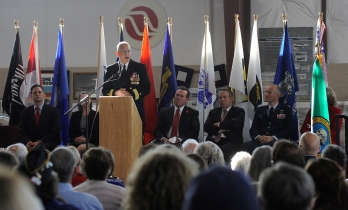 Honor Point Military and Aerospace Museum’s November 11th Community Tribute to Veterans is open to the public. Rear Admiral Doug Asbjornsen, United States Naval Air Reserve was the featured speaker during the 2016 Veterans Day Tribute at the Honor Point Military & Aerospace Museum at Felts Field. Admiral Asbjornsen urged the audience, which was estimated at 600, to not only thank a veteran for their service but to listen intently to their stories. It was a great day!