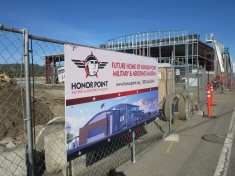 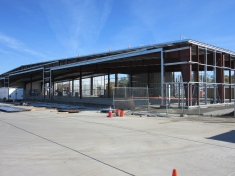 Why I am a Volunteer

Why am I a Volunteer?
I love airplanes noise. Can’t you tell from my back bumper patch? I love flying airplanes.

As a kid, growing up at 4th and Freya, it was a relatively short bike ride to Felts Field and there was not a lot of car traffic on the roads in those days (mid 30 ies) to worry about. My Mother raised 3 of us as a single parent—long before that word was so acceptable. At that time, the term was divorcee, not too an enduring word.  She and our Granmother, who lived with us, ran a small neighborhood grocery store, “Summersons’ Grocery” on the corner of 4th and Freya.

At that time in the mid thirties, there were three small grocery stores on Freya, between 4th and 5th streets. Mom’s at 4th, John Kirk’s at mid block and the IGA owned by Frank and Marie Barringer at 5th.
I graduated from LC in 1943. The draft had me classified as 1AL (limited service) because of my poor eye sight. (I could barely make out the big E on the chart, without my glasses.) So all of my class mates (nearly all) were in the Army, Navy or Marines right out of high school.

I finally got drafted in September 1945, after the fighting had ceased. The war was not officially declared over until sometime in 1946 (March??).  I spent one day at Ft. Lewis and then transferred directly to a Signal Corps unit (without any basic training) at the Presidio of SFO. Incidentally the barrack where I was stationed is still there on the west side of the parade grounds. The presidio has been decommissioned for years, but remains a Historical Site.

My first assignment was as a clerk in the message center that handled all incoming and outgoing teletype messages from the East Coast to the South Pacific and Alaska. It was amazing to me that there a couple of GI’s there from Detroit and New York who had physical limitations but had been drafted a couple of years earlier. The draft boards were scrapping the bottom of the barrel.

Upon learning all of the technical details of the job, I was promoted to PFC! Advancement at the center was too slow, so I applied and got the job of Company clerk. I spent the Christmas season learning to type and one of the first type messages was promoting me to Corporal and later to Sergeant.

I was transferred to the 749th MP Battalion at Camp Beale (Marysville CA), now Bearle AF base. The Battalion was subsequently transferred to Oakland Army Base, providing train guard service to LAX and town patrols in Oakland. Incidentally, we had one company in the Battalion that was all Black. They handle the patrols in West Oakland which is largely Black residences. I was discharged in the fall of 1946 at Pittsburg CA and spent 3 years in the Army Reserve, back in Spokane. Reserve retirement came in 1949.
From the aviation side, my first airplane ride was in 1938 at Felts Field. Our Pastor, Maurice Holt, had a private pilot’s license. In October that year, I flew with him in a 2 place Porterfield over east Spokane. He later served in WW2 as an Army Chaplain.

In 1947, I told Sue that a “man owes to himself” to something that he always wanted to do. I wanted to learn to fly. That was OK with her. So I started in Tracy CA, a small town east of the Bay area. They moved the Cessna Pilot training school to Hayward CA, so I finished up my training and got my private pilot license there. Incidentally, my check ride was with the Regional FAA check pilot and included cross wind landings at Napa CA, which we gave up on because they were too severe.

My first cross country flight was out of Hayward. I told my instructor that one of the tires had a bald spot. He said not to worry so we took off and headed to Napa County. On landing the bald tire blew out and we limped into parking and call for a tire replacement. Meanwhile, we had lunch at the famous Jones’s restaurant there. (I came back there several times for lunch and dinner with friends.)  LVAA (Livermore Valley Airmen Association) started Wings For Charity air show. Local performers and some just starting up performers appeared @ WFC event. Sean Tucker made his professional debut there. Al Silvers, professional parachutist, usually jumped from Jim Nissen’s Jenny, trailing the American flag to open the show. Over 3 or 4 years, over $1MM dollars were raised. However, liability insurance premiums got so high, we didn’t continue the show.

At this time, 1989-90, there was a lot of interest in real estate development in the Valley. Encroachment of the LVK airfield was a concern. Being a member of the airport commission at the time, we prevented one developer from building in the safety zone that was set up for LVK airport. Some of us were on the local TV channel, describing the purpose/need for the zone.  For a time there was a pseudo flying club at LVK. It was set up to make it possible to rent aircraft provided by one promoter. It was a good thing because you could get checked out on a number of aircraft, Cessna 150, 152, 172, Piper Cherokee, 180, Trinidad TB 20, Gruman TR2 and Tiger, etc. At nearby Hayward, Beechcraft had a flying club with Beech B19, B23, V35 and A36 available.

For a couple of years, during the Thanksgiving holidays, the Chino guys flew up to LVK in their B26, F6F, P51. John Schafhausen always flew down from Hayden Lake ID in his P51 to visit his brother-in-law, John Sprowl, who happened to also work at Kaiser and was a good friend. So naturally, I got a ride in his P51! You may recall the TV program, Baa Baa Black Sheep, which featured Pappy Boyington’s career in the Marine aviation in WW 2. John and his Corsair were one of the four who flew the aerial scenes for that TV series.